The Story Behind the Pic: A Linkup Sept. 22

How was your weekend? Did you have Labor Day off? I am back after a great 4-day weekend. I felt kinda icky Friday and most of Saturday but rallied enough to watch UGA win their first game. On Sunday I attended my Disney podcast friends' show at DragonCon--it was about the Haunted Mansion and it was such a fun show. I've never been to DragonCon before, so it was entertaining to see the costumes (cosplay). Today, I ran lots of errands, like a trip to Bed, Bath, and Beyond, TJ Maxx, Old Navy, Nordstrom Rack, ULTA, the Halloween store, and a trip to Target. I had to get a pumpkin spice frapp. too.

I've got another post coming tomorrow but I wanted to share an idea that's been brewing. I was looking at some blog pics, particularly one of me laughing, and remarked to myself, "If only everyone knew the real reason I was laughing--the real story behind the pic." And thus an idea was born.

On September 22, I'm starting a monthly linkup where I'll be sharing a pic or two from my blog or Instagram that tells the real story behind it. I would love it if you'd participate.

It can be a pic of you, a product shot, anything. Why were you laughing or smiling in the pic you chose? Was there a funny story behind it? A serious one? A sad one? Maybe it took 57 tries to finally get "the shot." Maybe you're holding your baby in one arm off-screen and taking a pic of your waffles in the other. We all know not all that we show in pics is real--sometimes it can be highly-styled. Let's get real. I want to know your stories--the good, the bad, and beyond. 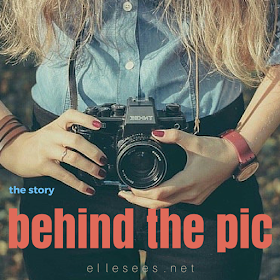 I hope you link up!
I can't wait to see what you share!

I respond to comments via email, so make sure I can respond!
For a faster response, please use Twitter or email: elleseesyou@gmail.com

You made my day by visiting! See ya tomorrow :)